Unlocking the masked pipelines of the 6800LE and overclocking the X800SE 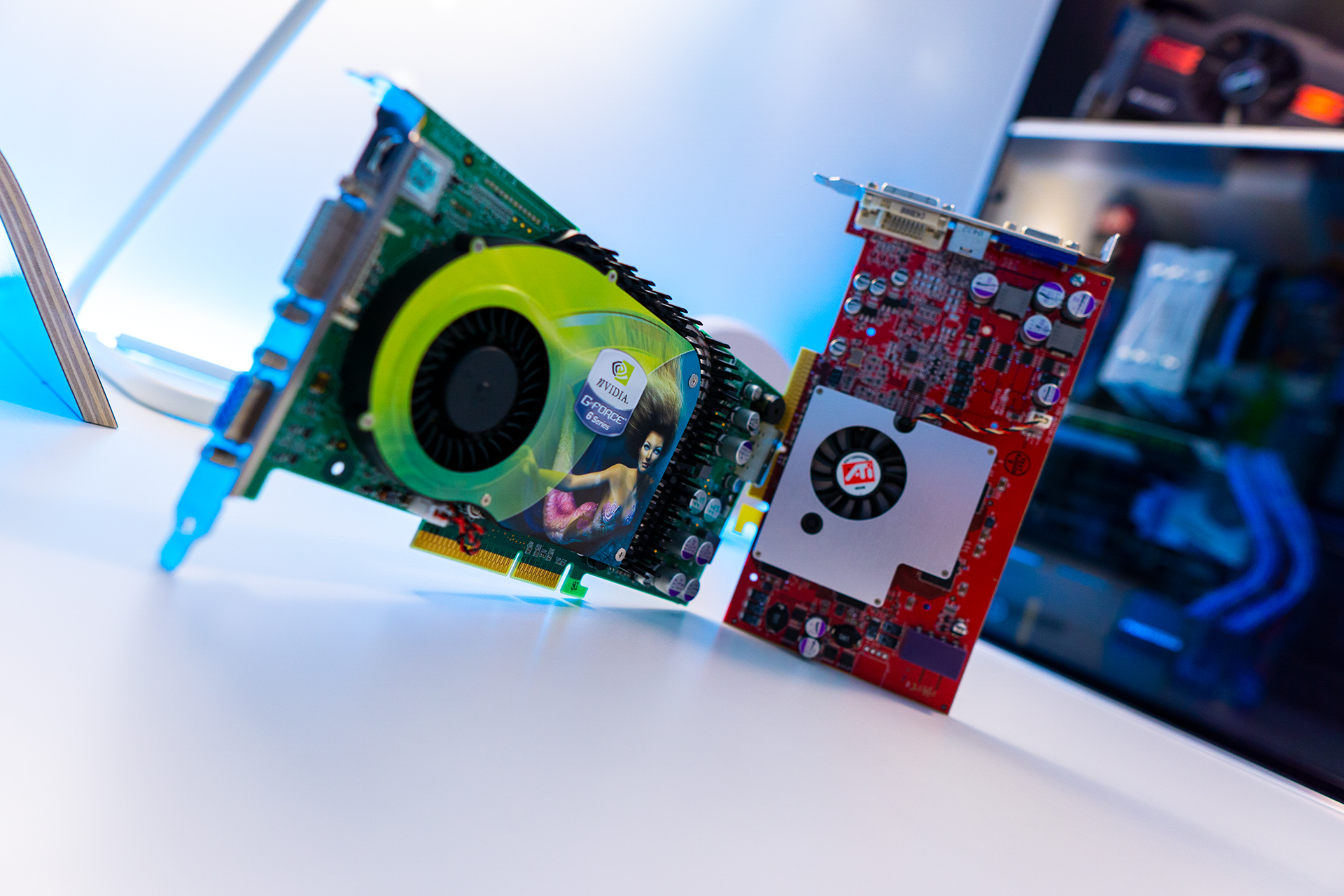 In this project my goal is to explore the potential hidden in the GeForce 6800LE and the Radeon X800SE.
Both of these cards are based on their flagship GPU chip (NV40 and R420) but have active only half of the computing units (or pipelines) and are clocked lower than the high end models; this usually helps keeping the costs down but also makes these cards interesting because some times, in order to optimise the production lines, cutted-down versions share components that make them having big overclocking or unlocking potentials.
So this will be an explorative project with some benchmark numbers but not a complete comparison.

The 6800LE, while still based on the fully fledged NV40, instead of having 16 Pipelines and 6 Vertex shading units, has only 8 and 4 of these units active and this basically means that they are still there but not active. Of course, one of the reasons why nVidia is producing similar cards is to be able to use NV40 chips which have some faulty pipelines or are not able to maintain target frequencies and make some money out of them (instead of having to throw these chips away).
It’s also reasonable to belive that, since the offer is not always able to satisfy the market demand with just “discarded chips”, sometimes a small amount of the these cut-down editions have fully funcional chips and we end up with fully unlockable cards, also able to operate at frequencies reserverd for higher end models. 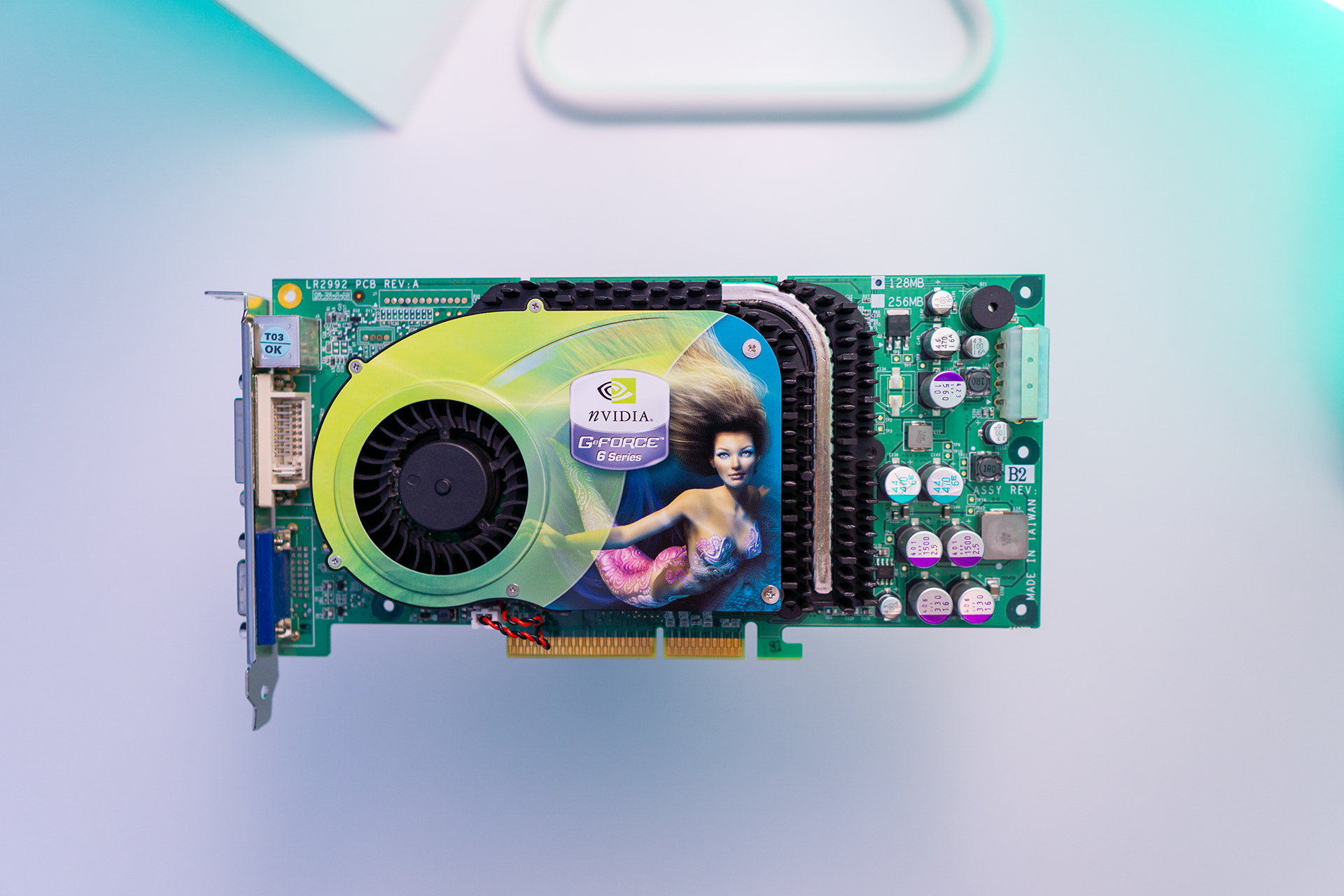 So, let’s see what I was able to unleash from the little “LE”.
With the sample in my possession (I have two in fact, but they behave pretty much the same) I was able to unlock the first group of (4) Pipelines and all the rmaining Vertex units, ending up with 12 Pipelines and 6 Vertex units, a configuration comparable to the GeForce 6800, which has 12/5 active units.
As for the frequencies, I was not expecting much because the 2.8ns RAM modules are rated at 357MHz (just 7MHz over the default) and the GPU, unless one is very lucky, usually does not clock much, expecially with unlocked units.
That said, the card was completely stable at 354MHz for the GPU (+54MHz/+18%) and 365MHz (730MHz) for the RAM (+15MHz/+4%) ending up as a GeForce 6800/6800GS hybrid. Not bad! 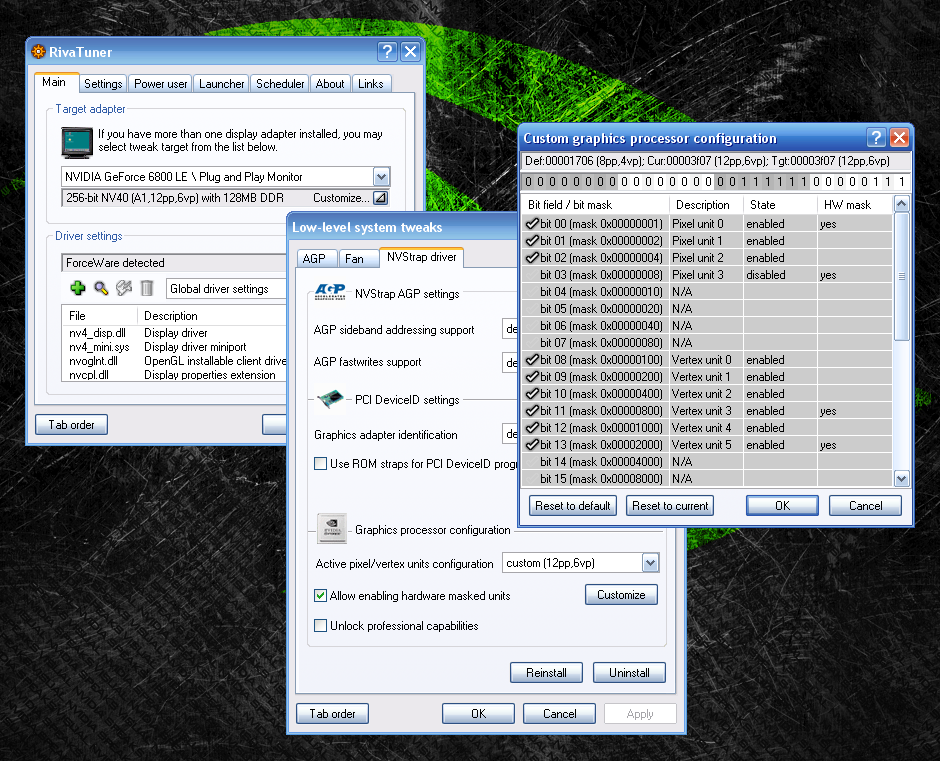 In case you are wondering how the hell is possible to unlock the masked units inside the GPU, the answer is: with RivaTuner!
RivaTuner is a famous video card tweaking tool widely used in the first decade of the 2000s which has more recently been integrated in modern tools like MSI Afterburner.
So, as showed in the image above, selectin the NVStrap driver tab from the low-level system tweaks menu allows you to install (activate) the ability to edit the GPU configuration. Once the edit is enabled, from the Customize window is possible to check which units are “masked” and enable them.
As you can see in my sample the Pixel unit 3 is disabled because the activation was causing visual artifacts in 3D.

The X800SE, although is based on the same flagship core of the higher end versions (like the X800XT) unfortunately doesn’t allow any pipeline unlock because of some hardware interventions ATi took to prevent it.
However, despite the inability to unlock masked Pipelines, the X800SE has some huge performance increase potential thanks to excellent overclocking capabilities.
The RAM modules, clocked at 400Mhz (800MHz DDR) are Samsung 2ns modules rated at 500MHz and basically the same ones used on some of the higher end brothers. As for the GPU, the only thing I can assume is that R420 is simpy good enough to always reache 500+ Mhz, especially if half of the Pipelines are disabled :-) 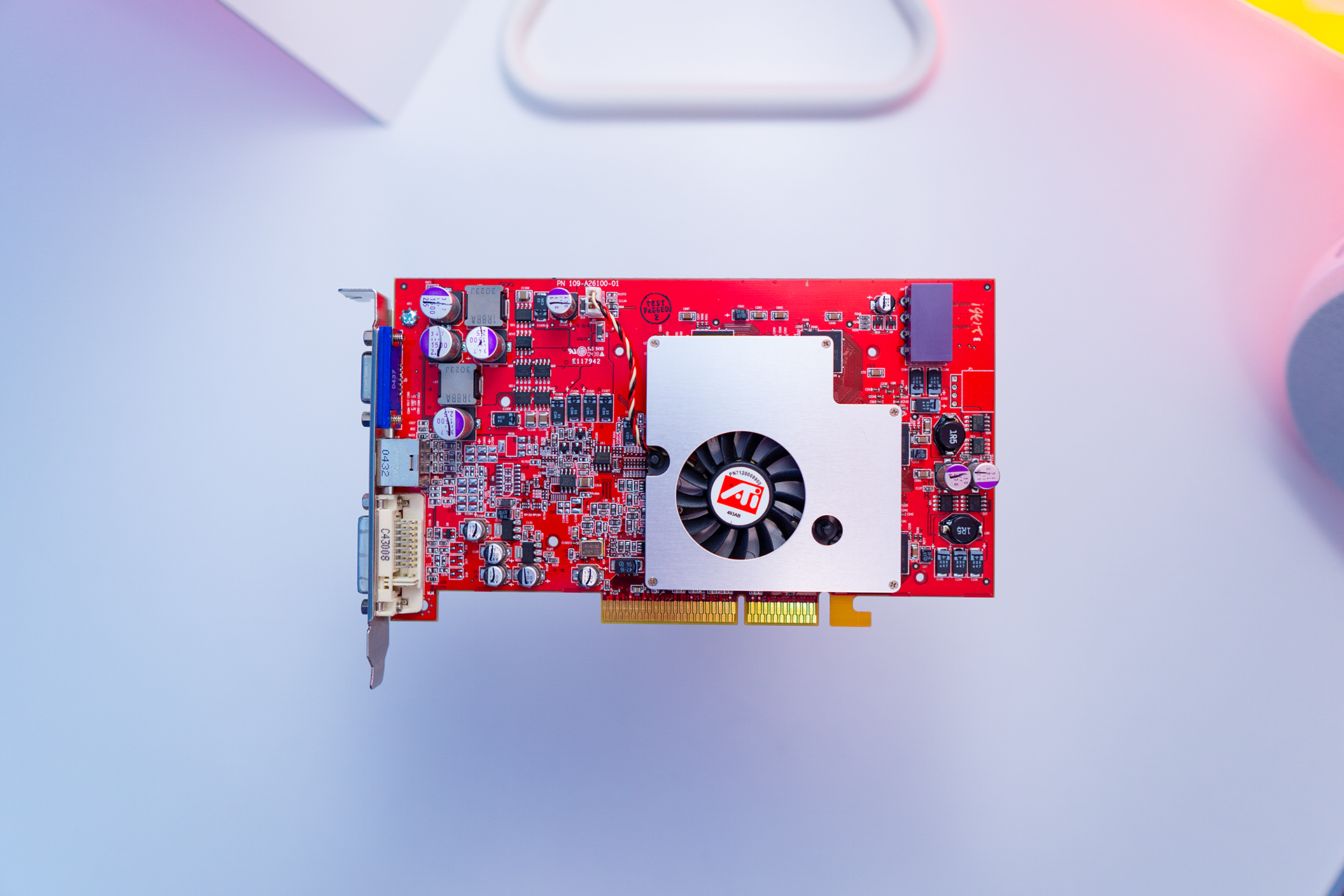 That said and despite all the initial premises I was still impressed by the results.
The GPU managed to reach 555MHz which is a +130MHz/+30% and simply with the stock cooler you see in the picture above.
As for the RAM modules, by chance they managed the same result of 555MHz (1110MHz DDR) which is a remarkable +155MHz/+39% over the default setting.
For both the GPU and RAM I decided to stay 10MHz below the artifacts limit and 5MHz below the gihest stable clock to avoid being on the edge of stability. 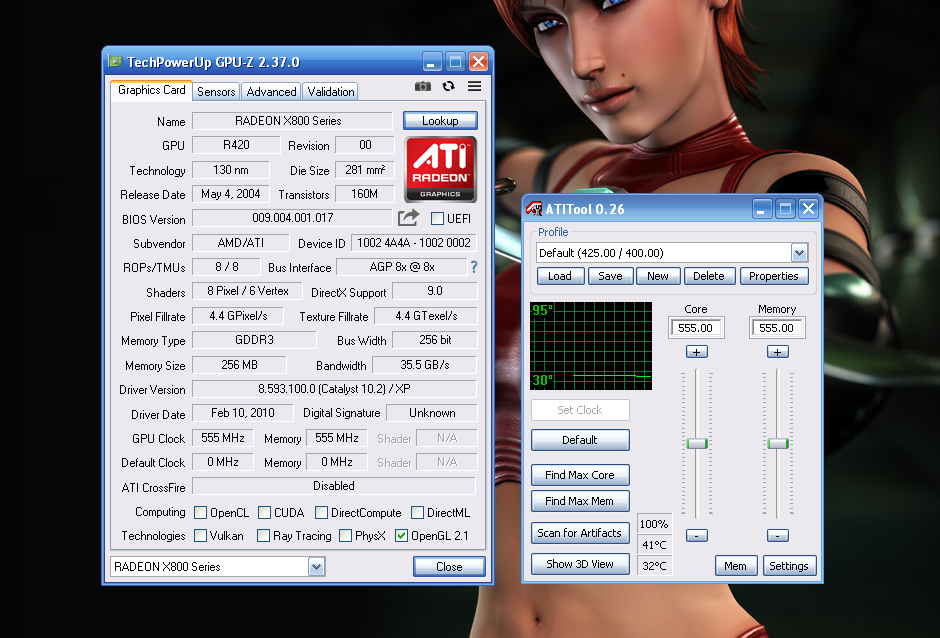 For the X800SE overclock I used ATITool which is really exceptional and allows you to save a lot of time thanks to the integrated Scan for Artifacts feature, this way you switch to 3D benchmarks/games tests only when you already have your possible max stable clocks.

The combination of Pipeline unlock and GPU core overclock allows the 6800LE to almost double the Pixel/Texture fill-rate compared to the default rate, this should result in a huge improvement in all the scenarios where memory bandwidth is not a limiting factor, since we were unable to increase these ones much over the stock values.

As for the X800SE, the huge clock increase for both the GPU and the memory allows the card to surpass in fill-rate even the unlocked 6800LE and should guarantee much better performance in bandwith bound situations like high resultions and use of FSAA filters.

As anticipated in the introduction, this is not a complete comparison between the two cards but more like a check of the improvements made possible with unlock and overclock.
I will do a proper comparison in another project with more cards and much more benchmarks.

That said, I tested the cards with 3DMark03, Doom3 and F.E.A.R. on the following configuration

So let’s start with 3Dmark03 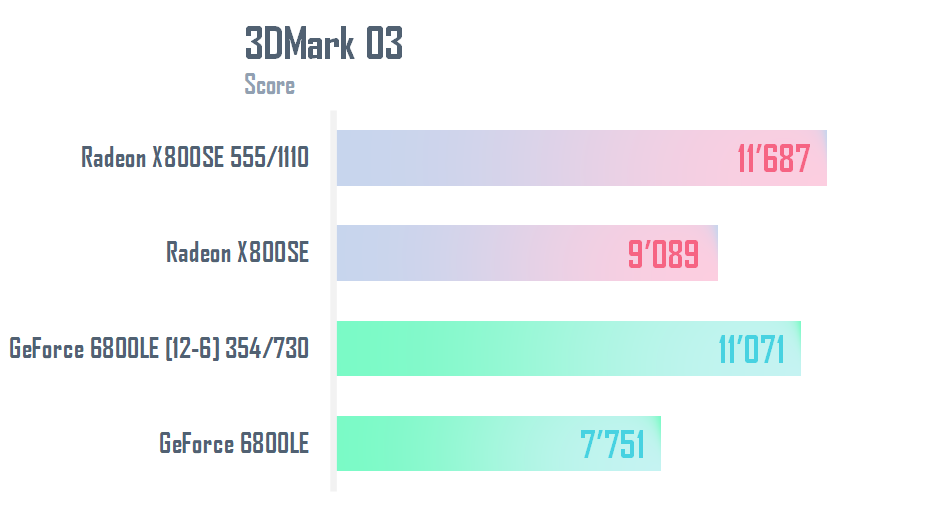 The results are pretty much what you would expect when look at the fill rate and bandwidth values, so no big surpirses here.
Anyway, it’s still worth noting that both cards are showing a significant score improvement, which is somehow impressive if you consider that it comes for free and it looks like we are comparing cards from different ranges. 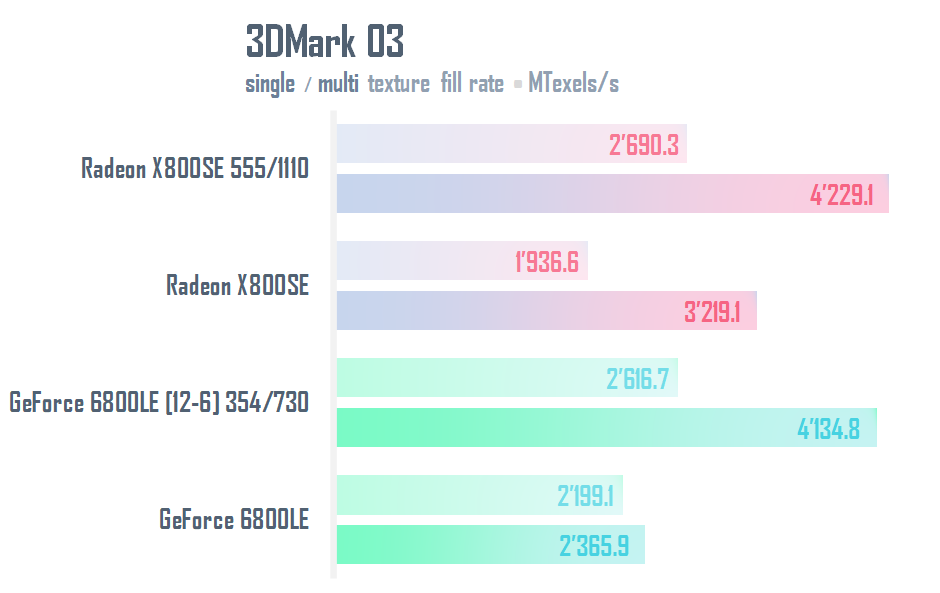 If we ignore single-texturing values, which are a little strange and somewhat controversial from my researches, the multi-texturing values are almost aligned to the maximum theoretical ones. This should also confirm that the cards are not bandwidth limited.

Let’s now see how thing are going in few games.
For both I used a combination of resulution and settings that were a little challanging for the cards at default in order to better evaluate how much the overclock/overlock was able to improve the situation. 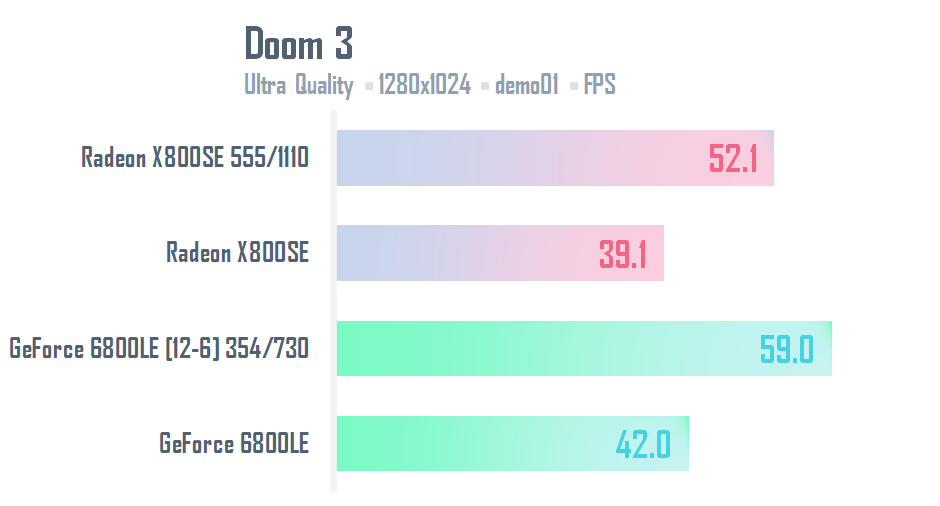 So in Doom3, thanks to the overclock, the X800SE managed to improve the score by 34%, ending up at 52.1FPS with Ultra settings. Back in 2004 I would have been happy to play the game with this card, probalbly scaling down to “High” to stick most of the time to the 60FPS mark.

The “unlocked” 6800LE manages to get even better, with a 41% improvement over stock and getting very close to the avarage of 60FPS!

When compared, the 6800 is still faster, despite the theoretical values are in favor of the X800SE. Probably software/feature optimizations are playing a role here.

F.E.A.R. is a 2005 game, known to be pretty heavy on the hardware of the period; here I decided to use the “Medium” preset for these cards. 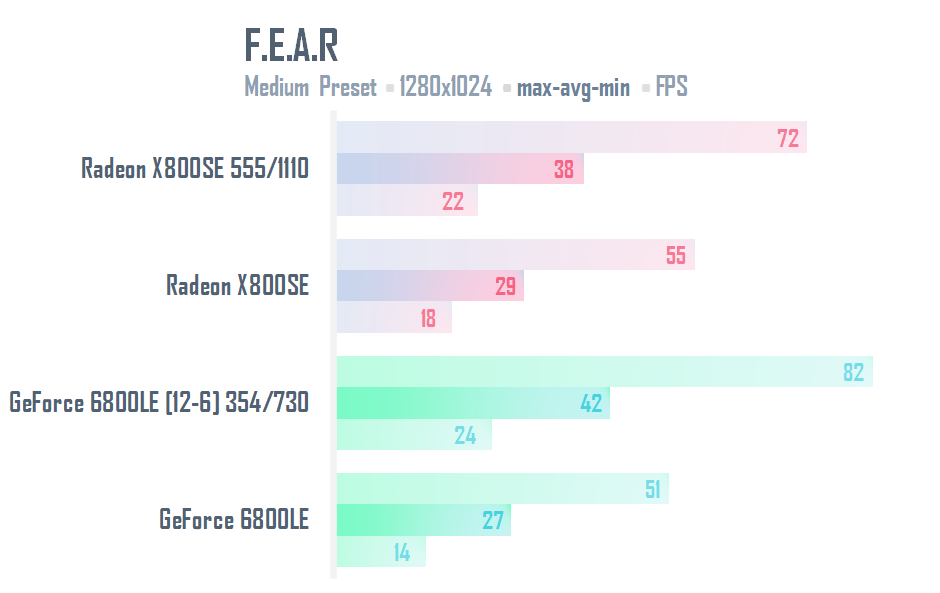 The X800SE managed to improve by 31% over stock, archiving 38FPS on avarage, probably still not enough for a very smooth experience.

The 6800LE, which at stock is slower than the stock X800SE, manages an astonishing improvement of 56%, reaching 42FPS on avarage, but as for the X800 not enough for an ideal experience.
For both cards a few steps down from medium to low for some settings would be needed to play the game smoothly, at least in 1280x1024.

Well, that was a fun project! 30%-40%+ of free performance is not something you see often, expecially in the last years.
I had the (two) 6800LE for a while and always wanted to try the Pipeline unlock to see what the card can do and understand the value it had back in 2004. Also, for some reason I tend to enjoy more the things that you get like this, with some tweaking and tuning: it’s so much mure satisfying to me.
The X800SE was a card out of my radar for some reason, back in 2004 I had the X800PRO VIVO (BIOS modded to 16pp) and I probably completely ignored the lower end SE.
In fact this card is a recent addition to my collection and I’m glad I bought it because it has been very fun to overclock!

As said I will revisit these cards in a future comparison, I suspect that the X800SE will do much better in memory intensive situations vs the 6800LE…
It’s all for this time, see you!